Silent < r > is perhaps the most curious feature in standard British English pronunciation for learners. It does follow a rule which we’ll learn below. All the silent < r > letters in this lesson are in red, so let’s make a start: 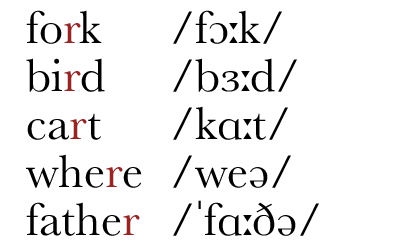 There is one commonly used exception to the silent < r > rule: the word IRON /aɪən/, which is pronounced with no /r/. You might expect one owing to the < o > after the < r >, but as every learner knows, English must have at least one exception to every rule.

The rule for silent < r > works in connected speech too. If a word ends in < r >, (CAR) and the next word begins with a vowel sound (ENGINE), the < r > will be pronounced in connected speech: CAR_ENGINE, but not if the words are said separately. Try these examples first separately, then together:

In GB English, speakers even add /r/ where it isn’t written to join words together, known as ‘intrusive < r >’:

The vast majority of native English speakers worldwide pronounce every written < r >, including most speakers in America, Canada, Ireland, Scotland, India and Pakistan. These are known as ‘rhotic’ speakers. English accents that follow the silent < r > rule are known as ‘non-rhotic’, and these include most accents in England, Wales, Australia, New Zealand and South Africa.

Not all accents in England, however, are non-rhotic, in the West Country a large number of speakers pronounce their ‘r’s, and this is true of pockets in the North too, though the rhoticity seems to be gradually disappearing in these areas.

Since most native speakers of English worldwide are rhotic, and rhoticity doesn’t tend to cause any problems in comprehension, there is no particular reason for learners of English as a second language to follow the silent < r > rule.

If, however, the learner is aiming for a standard GB English pronunciation, the rule needs to be learnt and practised. If you’d like to have a go, try this sentence pronouncing every < r >, then making every < r > silent: