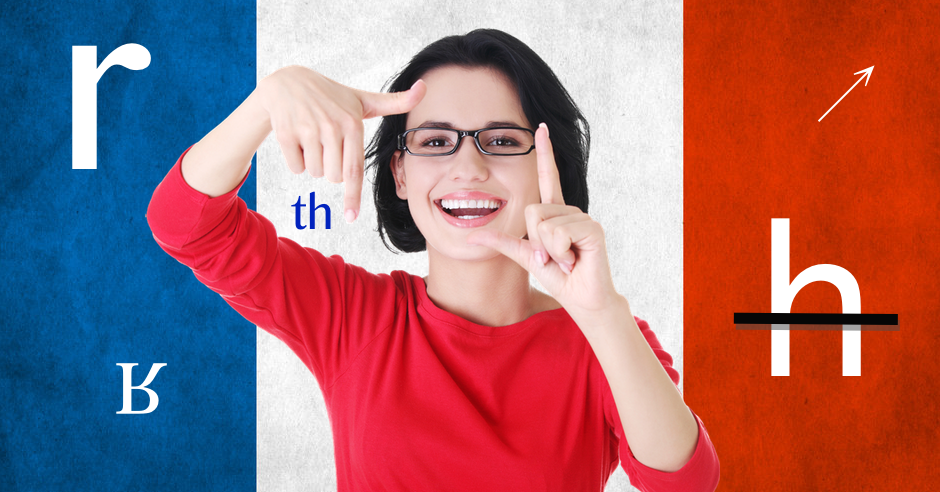 If your mother tongue is French, you may find certain sounds in English more difficult than others. Here we present to you some of the common errors made by French-speaking students at Pronunciation Studio:

French ‘r’ is a voiced uvular fricative /ʁ/, made at the back of the mouth, English /r/ is an alveolar approximant made near the front of the mouth – not to be confused:

French speakers tend to say every written ‘r’, but in British English you should not pronounce an ‘r’ if it is before a consonant:

Four thirty in the afternoon.

Many French centre and front vowels use rounded lips, whereas in English they would be made with neutral lips – the sound is very different:

The first thing I heard was a scream.

French does not contain dental fricatives θ or ð, speakers often replace these with /s/ and /z/:

We’ll see them on Thursday, I think.

The glottal fricative /h/ does not exist in French, it does in English:

French has just one close front vowel [i], English has two: /ɪ/ and /i:/ – /ɪ/ should be made with a slightly lower jaw, but French speakers often just use the one position for these vowels:

French tends to stress the last syllable of a long word, English does not:

French has a very unique melody – it is often flat and high with rising patterns. English is generally uses falling patterns more and has a greater difference in stress:

Where do you think we should go?
I don’t see how it is that important.

French contains one open vowel unrounded: [a], English contains 2: /æ/ (cat) /ɑ:/ (cart) so French often the French [a] instead:

French does not use diphthong (double) vowel sounds, so they often come out a bit flat:

Don’t go to the show.